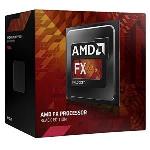 AMD FX processors  strike first. And last.
AMD FX processors are a DirectX® 12 performance leader, with the highest clocks you can get on a consumer desktop PC and at least twice the cores of comparably-priced competition.

Stay on the path to glory with an AMD FX processor in your system.
AMD FX processors delivers the highest clocks you can get on a consumer desktop PC, with at least twice the cores and more cache memory than comparably-priced competition.1,2,3  for a top-tier experience with Windows® 10 and DirectX® 12.

From AMD, the company behind proven high performance processors in the PlayStation® 4 and Xbox One gaming consoles, and Radeon graphics cards.

The control you want
- Unlocked clock multiplier for a powerful overclocking advantage4
- Highly configurable power and performance curve via AMD OverDrive software
- Tailor your experience to your personal preference, whether its performance, efficiency, or low noise

Reliability you deserve
- AMD processors power premium products and world-class operations from industry leaders like HP, Microsoft, Samsung Electronics, and Sony
- The AMD FX processor is built from the companys 8th generation x86 CPU architecture based on over 40 years of silicon-crafting experience

An Industry Leader in Price for the Performance
- Unlocked processors allow the maximum in tunable performance4
- AMD Turbo Core technology5 dynamically adjusts performance to give you the best experience, no matter what you are doing
- Get superior performance at a competitive price with unlocked technology